I think this is going to be my last post, as you might've guessed from the title. I'm a little bit sad. I had to do this blog as an assignment for a class, but I've actually enjoyed it.  For me, blogging was all about the learning. I've learned a lot about renewable energy: different types of it, its costliness, scientific advancements, etc. I feel decently educated about this topic now. I don't know how good of a job I've done passing on what I've discovered, but hopefully I've at least sparked an interest and made you want to read more about these things. If you feel the need to expand your knowledge, my favorite websites were:


I said "maybe" in my title because I don't want to say that I'll never blog again. If I come across something interesting, I might post it. Hope you've enjoyed reading!
Posted by Kristian Maples at 8:59 PM 3 comments:

More on the Game Day Challenge

So I blogged a while back about the Game Day Challenge that UT competed in. I wanted to be able to announce the winner in one of my posts, but I don't think I'm going to have the opportunity. I spoke to Jay Price, the environmental coordinator for UT, and he said that the winner probably wouldn't be announced until mid-December. He did, however, tell me some interesting things that I wanted to share.

As I mentioned before, the South Carolina game was the one that was designated as the game day for the challenge. We did not have a particularly huge crowd for this game, but according to Jay, we recycled 12.5 tons. Our goal was 18 tons, so we didn't reach that, but even with a smaller crowd this year, we still increased by 2.5 tons compared to 2010's game. Also noteworthy is that this is the most we've ever recycled for one game! Jay said that we were close to recycling 50% of our waste this year (compared to 30% last year). And, Jay shared something else... he has an idea of who probably won the Game Day Challenge for the SEC..... drum roll...... UT! He doesn't know for sure just yet, but he said that he feels pretty good about the likelihood of UT winning first place.

So obviously I am proud of UT for what we have achieved thus far. But we still have room for improvement: we currently recycle only 15% of our waste. Jay said that we could easily recycle 50% (or more!) of our waste. So, let's work on that next!
Posted by Kristian Maples at 3:05 PM 5 comments:

Who wants to save money??

So I've blogged before about the benefits of energy conservation in our homes, e.g. saving money. I linked to a website where you could get an approximate calculation of how much money you could save, but I didn't have a whole lot of data. Now I do. Julie Satow, a writer for the NY Times, recently posted an article that addresses this. She writes that Deutsche Bank Americas Foundation and Living Cities commissioned a report that illustrates the significant benefits of efficiency in homes. An 88-unit, 2-building housing complex in Manhattan saved 50% of fuel costs by installing new boilers and heating controls. Another building saved $551 a year per apartment. "Marc Zuluaga, a vice president and director of the multifamily energy services group at Steven Winter Associates, a building consultant in New York" was interviewed for Satow's article. He pointed out that these savings were achieved without implementation of any "particularly exotic technologies" like solar panels. They just made small changes to make the homes more efficient. One way that people were inspired to make these changes is that each apartment was responsible for paying the electric bill. When the money was coming from their pocket, they cared more about saving money. If it's this easy, why isn't everybody doing it? I don't really know. Partially because there isn't much data to support these claims. But here is an example of one study at least that does prove that you can save money!

http://www.nytimes.com/2011/11/09/realestate/commercial/study-clarifies-the-energy-savings-in-retrofitted-buildings.html?_r=1&adxnnl=1&ref=energy-environment&adxnnlx=1321641289-nYfGjYuNKmAcPev8TwvOjg
Posted by Kristian Maples at 10:50 AM 4 comments: 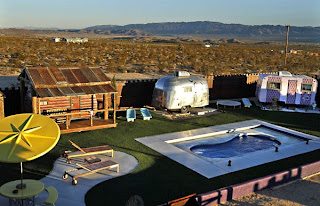 Honestly, when I first saw this I just laughed. The name of this delightful little getaway is Hicksville Trailer Palace.  According to the Palace website, it was created as a sort of hideaway for artists to express themselves without being bothered by the outside world. It boasts several different themed trailers, a tipi, underwater speakers, a hot tub, salt-water swimming pool... and other random things that one might desire access to on vacation. So why, you might be wondering, am I blogging about it? One amenity in particular caught my eye: the salt-water swimming pool; the website says that it is solar-powered. Apparently, the "hotel" as they call it, is largely solar-powered. I read on Wikipedia that it is 95% powered by solar energy; I couldn't find that information anywhere else though, so I'm not sure how true that is. But regardless, it's still pretty cool that an entire hotel-like place is run by solar.

I was looking online for something to blog about, and I came across something that I thought was pretty neat. Jack Robertson, a Stanford University graduate and fromer BPA (Bonneville Power Administration) CFO, has come up with a pretty incredible idea. He calls it the "Hydrogen Hub." According to http://www.beavertonvalleytimes.com/sustainable/story.php?story_id=123912628689392400, it "would be a power plant that uses water and air to produce a form of ammonia, then burns the ammonia to yield hydrogen energy." Robertson believes that his invention would curb the need for our current major types of energy (coal and gas). He proposes the idea because he thinks that the current hydro power methods are inefficient. In the spring, there is actually a surplus of energy because of the melting snow and increase in winds. The article says that some people were actually getting paid to take power in the spring. Then in the summer, prices soar because there is such an increase in demand; everyone needs air conditioning. Robertson is quoted as saying, "It's feast or famine, because of the way the system is designed." One of the biggest issues he faces with his Hydrogen Hub is efficiency. He plans to do some experimenting to see how efficient he can make it. One thing that disappointed me a little bit about this article was the date; it was from 2009. Granted, that isn't very long ago, but this is the first time I've heard about it. I hope this doesn't mean that he was unable to make it efficient enough!
Posted by Kristian Maples at 11:44 AM 2 comments:

What's the best source of energy for a very sunny country? Wind, of course! Wait... what?

When I first started this blog, I said that I was going to write about many sources of renewable energy. I said this partly because I wanted to explore the many different types, but it was also because I was afraid that I wouldn't have enough material if I chose only one. But I have been pleasantly surprised at how much solar info is out there! I've had much more to write about than I initially expected. My reason for saying all of that, though, is that I am switching gears a little bit (finally) to talk about wind energy.
I was reading on the Celsias website again and came across an article entitled "Sunny Egypt Interested in... Wind Power." As hot, sunny, and desert-y as Egypt is, one might expect them to utilize solar energy. But recently, they have decided to increase wind's current 1% contribution to 12% by 2020. Apparently, Egypt is actually a good place for wind power. The article says, "Jonathan Walters, transport and energy manager for the World Bank's Middle East and North Africa regions, said that 'high and persistent' winds in the Gulf of Suez suggest Egypt has 'excellent potential for wind power - among the best in the world.'"
The Egyptians built a wind farm, called Zafarana, in 2001 and last year it generated 1,147 gigawatt hours of electricity. They are presently trying to get more funding to build an even bigger wind farm (a 1,000 megawatt).
Here's where I read the article: http://www.celsias.com/article/sunny-egypt-interested-wind-power/
Posted by Kristian Maples at 2:10 PM 3 comments:

More and more people have a desire to utilize solar power, but many don't know how it would be possible for them. More specifically, I'm talking about some winery owners in Napa County, California. The president and CEO of the Far Niente wineries, Larry Maguire, said that he didn't want to replace vines with solar energy. From an economical point, I suppose that is sensible if he is making a large profit from his vines (even though businesses save money by incorporating solar energy, it does require funds to get things going). Maguire is quoted as saying, "“Yet, we recognize that our environment is facing significant challenges, and as an agriculture-based business we have an obligation to do our part.” Thankfully in this case, we have someone who sees that he has responsibilities beyond simply money-making, but (naturally) he also wants to do whatever is smartest economically. Believe it or not, there was a solution that could satisfy these different desires: a Floatovoltaic Solar System. The company SPG Solar Incorporated designed "a series of solar panels installed on pontoons that float upon the winery’s irrigation pond." After government rebates, the total cost of these panels was $4 million. It sounds like a lot, and it is; but, there is an excess of energy that the winery owners are able to sell back to the grid. Therefore, the winery owners will make back all of the money within 12 years. The solar panels actually last for 25 years, so the owners will end up profiting from this.

This is an incredible example of people who didn't just give up because something seemed difficult. Not only did they come up with a solution, but they came up with a profitable one!

Here's where I got my quotes and my story: http://www.celsias.com/article/worlds-first-floatovoltaicsolar-system/
Posted by Kristian Maples at 9:49 AM 3 comments: