A little bit about the Dome Home

I can't remember a time that I was unaware of solar energy. As I mentioned before, my grandfather was always working on ways to conserve our planet's resources. He constantly made improvements to his own inventions, which were already impressive considering the time period. As early as the sixties, he built a house and strategically installed pvc pipes and ran water (that was heated by the fireplace) through them to provide heat for the floors. In the same house, he placed skylights to lighten and heat the rooms. The house was positioned to make the most use of the sun. He was very aware of the sun's potential for energy and began researching ways that he could utilize it.
His biggest solar energy accomplishment was the completion of a self-sustaining Dome Home. The 3-bedroom, 3-bath island house was powered totally by solar energy; it had a hot tub, two refrigerators, ceiling fans, air conditioning, satellite TV... everything (and more) that you would expect in a home.
For my next post, I will describe in more detail how the solar energy was used and what he used as a water supply.

Here is a picture of my grandfather and my uncle installing the solar panels: 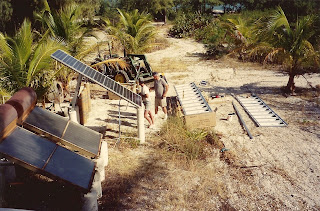 Posted by Kristian Maples at 4:10 PM